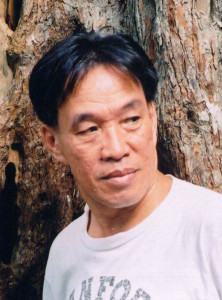 Art is clearly a universal language to Dr Ho Chee Lick, a linguist and senior lecturer at the National University of Singapore, otherwise known to be a prodigious painter with works collected in the National Gallery and NUS Museum.

In 2011, he embarked on a series of works that would transcend all differences in religion. To date, he has produced 400 drawings dedicated to places of worship in Singapore, from Buddhist to Zoroastrian, from church steeples and domes to gopurams and shrines. A selection was featured in a solo exhibition at National Library, during the Singapore Art Week in January 2015.

While some may see religion as a source of division, Dr Ho takes another perspective: “It is natural for people to need religion, especially in the face of adversity. Perhaps as I believe in my god, I can be happy too that you believe in your gods.”

Born in 1950, Dr Ho had the good fortune of learning painting as a Chinese High School student in the 1960s under Chen Wen His and Chen Chong Swee, two of Singapore’s pioneer artists, best known for developing a ‘Nanyang Style’ (Nanyang: Chinese for ‘south seas’) after a field trip to Bali.

But Ho cultivated a passion in drawing even as a child, when he would attend Chinese wayang performances in the street and later draw the characters from memory. Many years on, while he was pursuing higher studies in the US, he started drawing random scenes of back alleys and the homeless people.

He began drawing places of worship here one day, when he chanced upon what looked like a dilapidated storeroom near Farrer Park, only to discover by surprise that it was a neglected Chinese temple dedicated to the Monkey God. One place hence led to another for Ho, more fascinated with such places of everyday life, than with the grand facades of shopping malls.

For his Singapore Faiths series, he would replicate the intricacies of religious architecture using the cheapest material possible: postel colour and crayon. He would match the shapes of any house of worship randomly with pieces of paper already treated with shades and spots of red and brown. He thinks of it as a way to let beauty emerge “out of chaos”. 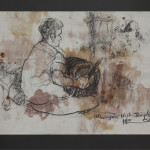 Ho says his experience of drawing these places around Singapore has been interesting. He has encountered curious children tugging at him, and he has interacted with believers who are sometimes poor people. Once, a young man offered him a seat and asked him about the meaning of life. The jovial Dr Ho could only profess that he has no immediate answer, though he personally practises some form of meditation or prayer for a better world.

Last year, Dr Ho would see his drawings incorporated into a publication entitled Faith in Architecture: 50 Houses of Worship. A collaboration match-made by Ethos Books, it consisted of articles by students of Nanyang Technological University, under guidance of Dr Gül Inanc, their lecturer at the School of Art, Design and Media.

By a happy coincidence, Dr Ho already had drawings for 41 of the places that students researched on. For the remaining nine, however, he had to travel around the island to complete brand new works. He did it within just two weeks.

While Dr Ho has now achieved an artistic milestone with this homage to houses of worship, he does not plan to rest on his laurels. His new project, he says, will deal with a different space familiar to Singaporeans: the HDB void deck.